We are 4-Phenoxyphenylboronic acid CAS:51067-38-0 manufacturer and supplier in China, Pls send inquiry of to info@nbinno.com of visit www.nbinno.com our official website should you have any interests

Chemical Name:4-Phenoxyphenylboronic acid
CAS.NO:51067-38-0
Synonyms:(4-Phenoxyphenyl)boronic acid
Molecular Formula:C12H11BO3
Molecular Weight:214.02500
Physical and Chemical Properties:
Density:1.23
Melting point:141-145ºC
Boiling point:377ºC
Flash point:181.8ºC
Index of Refraction:1.605
Specification:
Appearance:Off-white to white crystalline powder
Purity:≥98.0%
Packing:25 kg/drum, can also be packaged according to customer requirements
Storage:Store in a cool, ventilated place
Application:Intermediate of Ibrutinib. Widely used in the synthesis of pharmaceuticals, dyes and other fine chemical products. Can also be used to prepare anticancer drugs, such as ibrutinib.
Note:The product under valid patents will not be offered to the countries covered by patents. 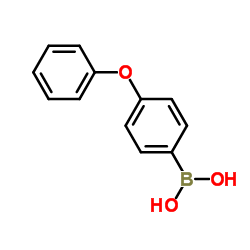 Related News: When using the raw materials, as an API manufacturer we produce API in the large reactor in our plant.3972-65-4 However, compared with the 60-70% refinement rate in developed economies such as North America, Western Europe, and Japan, China is still only equivalent to the level of the United States in the 1980s. There is still a lot of room for improvement in China’s refinement rate. period.Methyl 2-amino-4,5-dimethoxybenzoate Since inception in 2004, ICIG has acquired 15 businesses, all of which have origins in major global chemical or pharmaceutical corporations and are independently managed.Ethyl chrysanthemumate As you can see, a considerable number of staff is involved in the production phase until an API is finally manufactured.The company has now selected a single engineered iPSC clone, and generated and fully-characterized the master engineered iPSC bank for GMP production of FT819.